The North Lake Tahoe destination is continuing to monitor the COVID-19 outbreak with guidance from public health and government officials, along with tourism-industry partners to ensure the most accurate and timely information is provided.

Live Through This: A Lifetime with Suicidal Thoughts, & Art as Social Justice 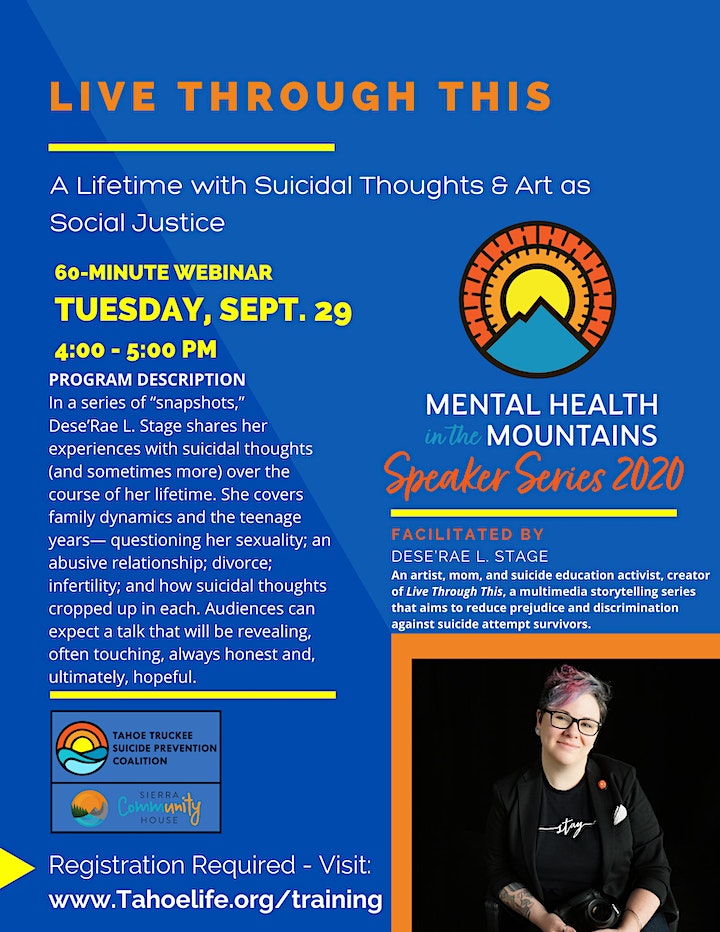 Program Description: In a series of “snapshots,” Dese’Rae L. Stage shares her experiences with suicidal thoughts (and sometimes more) over the course of her lifetime. She covers family dynamics and the teenage years—the difficult transition from middle to high school, questioning her sexuality; an abusive relationship; divorce; infertility; and how suicidal thoughts cropped up in each. She shows the audience a living portrait reflecting recent CDC findings indicating that suicide is a response to adversity, rather than mental illness as a singular cause. She walks us down the path that led her to Live Through This and brings the voices of attempt survivors with her through portraits, quotations, and video—literally taking the audience into an interview with her. She discusses major themes that crop up in the stories of survivors, along with the impact the project has made in a number of contexts. Stage implores listeners to open their hearts and their minds to those of us who have literally lived through it, and provides incontrovertible evidence that suicide affects all of us. Audiences can expect a talk that will be revealing, often touching, always honest and, ultimately, hopeful.

Dese’Rae L. Stage is an artist, mom, and suicide education activist. She created Live Through This, a multimedia storytelling series that aims to reduce prejudice and discrimination against suicide attempt survivors. Live Through This reminds us that suicide is a human issue by elevating and amplifying survivors’ voices through raw, honest stories of survival, and pairing them with portraits—putting faces and names to the statistics that have been the only representation of attempt survivors in the past. Dese’Rae has received awards for her work, including the SAMHSA Voice Award, the SXSW Community Service Award, Investigation Discovery’s Inspire a Difference Everyday Hero Award, and the American Association of Suicidology’s inaugural Transforming Lived Experience Award. Live Through This has received media coverage from the New York Times, Associated Press, NPR, CBS Evening News, and more. Dese’Rae is featured in a documentary about suicide prevention advocates called “The S Word,” currently screening nationwide. Dese’Rae also produces and co-hosts Suicide 'n' Stuff, a video podcast that examines suicide through a critical suicidology lens. Her writing has been published by Cosmopolitan, CNN, and Romper. She lives in Philadelphia with her wife and children.

Live Through This: A Lifetime with Su...